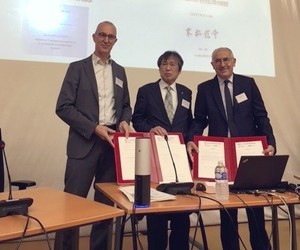 France-Japan Collaboration: a new Agreement on Mutual Recognition of Studies

28/07/2022
On 27 July, an Agreement on Mutual Recognition was signed between CDEFI, France Universités, the association representing French universities, and the Japan Committee of Universities for International Exchange (JACUIE), which represents public and private higher education and research institutions in Japan. Such agreement will allow mutual recognition of studies, diplomas and credits in order to facilitate further studies in France and Japan.

This agreement was signed during the 10th France-Japan Science and Technology Joint Committee Meeting that took place on 27 July in the premises of the French Ministry of Higher Education and Research. The event was attended by ministerial delegations from both countries, as well as representants of French and Japanese research laboratories and institutions.

The Joint Committee have been an opportunity to assess the current state and perspectives of collaborations in research regarding the four strategical fields of collaboration identified by France and Japan: digital technologies, health, energy and agriculture. Many French and Japanese research stakeholders were invited to speak about national priorities for 2030, historical collaborations, major achievements, and future projects.

During a session dedicated to the cooperation between French and Japanese higher education and research institutions, CDEFI, France Universités and JACUIE highlighted the dynamism of both academic and scientific collaborations and expressed their will to develop partnerships in order to initiate new research projects and grow student PhD mobility. The agreement was signed between three parties after a first agreement was settled in 2014 between CDEFI, the CPU (now France Universités) and the Japan Association of National Universities (JANU). Today’s new collaboration takes place within the same dynamic and paves the way to new partnerships between all public and private higher education and research institutions in Japan.